You’ve seen domain names ending in new extensions such as  .tech, .shop and .app. Have you ever wondered how these came to be?

In 2011, the Internet Corporation for Assigned Names and Numbers (ICANN) approved a plan to allow companies to introduce new top level domains. (A top level domain is the part to the right of the dot, such as .com and .net.) ICANN opened applications for these new extensions the following year.

But the organization faced a quandary: what would it do if more than one person applied for the same top level domain?

First, it would urge applicants for the same name to work it out amongst themselves. If that failed, ICANN would then hold an “auction of last resort” and give the top level domain to the highest bidder.

As it turned out, there were over 200 top level domains that had more than one applicant. At the top of the heap, .app had the most with 13 applicants.

Let’s look at how TLD auctions work and who ended up getting the rights to register new domains—and who won the pot of gold.

When it came to deciding who would operate a TLD, most of the time the parties worked it out amongst themselves to determine who would take charge of a given top level domain. 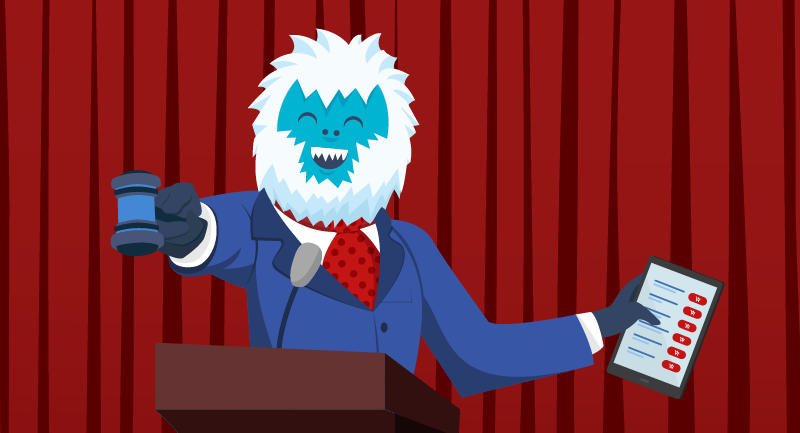 These auctions had non-disclosure terms in which the bidders weren’t allowed to disclose the final price. Still, some of the prices leaked.

In one noteworthy example, Automattic, the company that runs WordPress.com, paid about $19 million for the rights to run .blog.

Other domains with prices rumored at $15 million or more included .design and .law.

Only 16 top level domain names ended up being auctioned off by ICANN. But the total haul is staggering: $240 million.

The TLD .web led the list. Verisign, the company that operates .com, won the domain for $135 million. (Some of the losing bidders are challenging the auction result, which is why you aren’t able to register .web domains yet.)

GMO Registry, a company in Japan, forked over $41.5 million for .shop.

As for the most contested extension, .app, Google paid $25 million for it.

The other domains were settled for less than $7 million each.

A Lot of Money

The $240 million spent in these auctions is currently sitting in a bank account doing nothing.

Before the application period began in 2012, the community that works with ICANN to set policy decided that this money would be set aside for some future use as determined by the community.

There’s a lot of work going on to determine how this money should be spent. A popular idea is to issue grants to worthy internet-related organizations.

New top level domain operators have asked for some of the money to be spent raising awareness of new domain name choices.

And ICANN itself has decided to use $36 million of the pot to plug budget holes.

The big prices companies paid to acquire some of these new domain name extensions shows that they have big plans for them.

The good news for you is that you don’t have to pay millions of dollars to get a second level domain (the part to the left of the dot) that uses these expensive extensions.

Namecheap offers hundreds of these extensions starting at just a couple of dollars for the first year.

10+ Advanced Off-Page SEO Techniques for 2020 and Beyond

How to Get More Organic Traffic Without Doing Any SEO (Seriously)