With SecureX, you can accelerate threat hunting and incident response by seamlessly integrating SecureX threat response and your existing security technologies. You have the flexibility to bring your tools together, whether it’s with integrations that are built-in, pre-packaged, or custom. If you have Cisco Stealthwatch, Firepower, AMP for Endpoints, Umbrella, Email Security, Web Security, or Threat Grid; SecureX threat response is included with your license at no additional cost.

Connect your entire security stack–Cisco or otherwise–for faster investigations Aggregate and correlate security context from multiple technologies in one view Get the most out of your existing security investments, including from our technology partners

The SecureX platform has three categories of integrations:

Built-in integrations are developed by Cisco, or select technology partners, for customers to instantly configure. These typically are integrations where SecureX threat response produces threat intelligence to be visualized in the partners’ user interface. Though there are some exceptions like VirusTotal or when a partner builds the threat response APIs into their core code. Pre-packaged integrations are developed by Cisco or technology partners for customers to use ready-made scripts that they install into cloud infrastructure, which they maintain. The time spent is minimized, as you don’t need to learn any APIs or write any code. These typically are SecureX threat response modules that produce threat intelligence to be visualized in SecureX. These are available modules in SecureX. Custom integrations can be created by customers leveraging Cisco and technology partners’ open APIs. The time spent on integration is reduced by using our resources on DevNet to quickly get started, including training, links to code on GitHub and extensive use case and workflow documentation on ReadtheDocs.

We made a promise in late April: “… we’re speeding up detection, investigation, and remediation across your environment with many more pre-packaged integrations. We are pleased to announce that time is now.

VirusTotal is a free service that inspects items with over 70 antivirus (AV) scanner and URL/domain blocked list services. The threat response VirusTotal module allows you to query a URL, IP address, domain or file hash, in the incident response process, to gain additional context from the AV scanners and services as to the threats associated with the sample. You can register for a free VirusTotal account and receive an API key. Threat Response uses the API key on your behalf to include VirusTotal query results in any investigation.

The threat response extension provides the capabilities to right-click pivot from an IP Address in QRadar into an investigation in the Threat Response console and hover over 100+ property field types and query threat response for Verdicts. 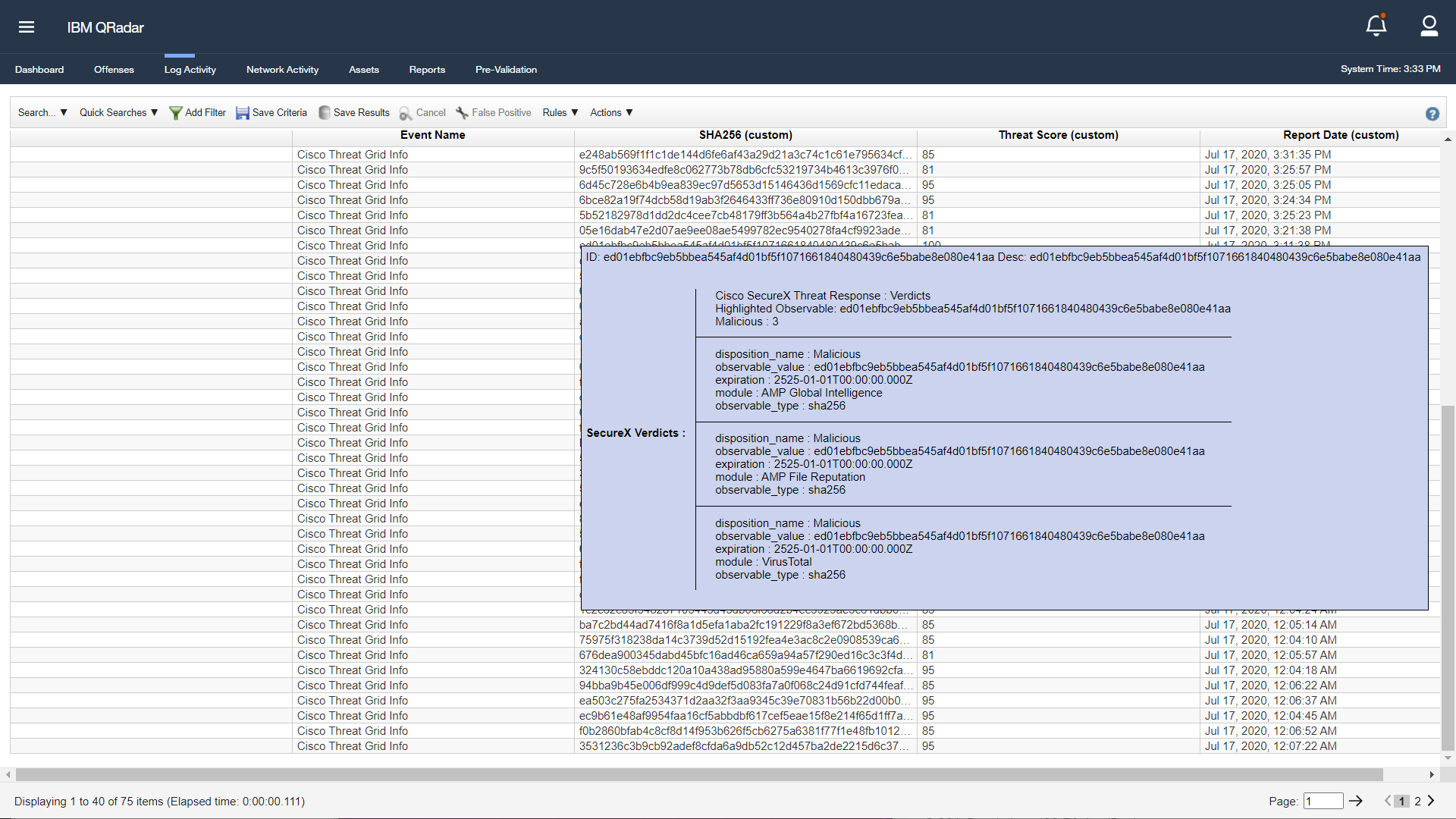 ServiceNow Security Operations (Security Incident Response and Threat Intelligence) can leverage the Verdicts, Refer and Response capabilities provided by threat response to assist the security analyst in their investigation workflow. This enables the analyst to take response actions from within ServiceNow to remediate threats.

Phantom threat response plug-in enables a user, or an automated playbook/action, initiates a query to threat response for Verdicts or Sightings of an observable and render in a table.

To utilize the pre-packaged integrations, you must first deploy a cloud infrastructure to implement the threat response serverless relay API. We created a step-by-step installation guide and recorded tutorials to make it easier and code on GitHub, that is pre-configured for AWS Lamba. The API itself is just a simple Flask (WSGI) application which can be easily packaged and deployed as an AWS Lambda Function, working behind an AWS API Gateway proxy using Zappa. An already deployed Relay API (e.g., packaged as an AWS Lambda Function) can be pushed to threat response as a Relay Module using the Threat Response Relay CLI. The threat response python API module is available with pip install.

Threat Response module for investigation of IPs. Query Auth0 Signals for an IP address to find out if it is on any blocklists. Return verdicts for the IP based on the scoring provided. Returns Open-Source Intelligence (OSINT) context from over 100 curated and normalized blocklists.

SecureX threat response module for investigation of IP addresses. SecureX receives a Verdict response from C1fApp. Malicious Verdict as the observable is found on a block list and the Indicator is the feed on which it was seen.

Threat response module for the investigation for verdicts on IPs and URLs, receiving Cybertracker Verdicts and Judgements.

The Gigamon ThreatINSIGHT module enables threat response to query network and threat data for Sightings of observables from the Gigamon intelligence. Gigamon completed the Cisco Compatible Certification for the integration and published a joint solution brief.

Threat response module for the integration of Google Safe Browsing; a blacklist service provided by Google that provides lists of URLs for web resources that contain malware or phishing content. The Google Chrome, Safari, Firefox, Vivaldi, and GNOME Web browsers use the lists from the Google Safe Browsing service for checking pages against potential threats, and this integration enables the user to have the blacklist intelligence in threat response.

Have I Been Pwned*

Threat response module for the investigation of a SHA256. The module adds context around a compromised email and username associated with that email and context about a user for an environment. If Cisco Email Security Appliance module is enabled, then it returns that this SHA256 has been sent to identified email addresses, as has been seen in the data breaches. Small monthly for subscription.

Threat response module for the investigation of URLs. Returns the Verdict.

SecureX threat response modules for IP address(es) investigation, for both WAF and DDoS abusive activity, along with Indicators for those Sightings. Certified as Cisco Compatible.

SecureX threat response Pivot / Respond menu on an IP address. Shodan is a search engine for Internet-connected devices. Web search engines, such as Google and Bing, are great for finding websites.

The SecureX threat response SpyCloud module empowers users to initiate an investigation into a SHA256. The module adds context around a compromised email and username associated with that email and context about a user for an environment. If Cisco Email Security module is enabled, then it returns that this SHA256 has been sent to e.g. these email addresses have been seen in the data breaches.

The SecureX ecosystem will continue to grow, with additional integrations in development now, both by Cisco and our technology partners. You and your organization are also empowered to build your own. The power of the SecureX platform is yours.

Acknowledgements: My thanks to Michael Auger, manager of ecosystem integrations, and my partner in this endeavor. Michael designed the relay architecture that made rapid development possible, between SecureX and technology partners. Michael led a team of a dozen developers, program managers and quality assurance engineers, and worked closely with partners’ engineering teams; to build 27 integrations with 24 partners for the initial SecureX release. Well done!!

How to Make Your Business Website Accessible to the Hearing Impaired